The Media Theatre has two spring musicals which will have audiences singing along, clapping to the beat, and dancing in the aisles. One features great hits of the 1960's while the other takes us back to the disco era of the 1970's.

First up is "Beehive: The '60's Musical" March 13 to March 31. The show, created by Larry Gallagher, is a musical tribute to the women who made the music of the era so special – everyone from Lesley Gore to Janis Joplin, from the Shirelles to the Supremes, Aretha Franklin to Tina Turner, and every woman in between! With two dozen beloved hits, the show takes you on a journey through song, documenting the dramatic changes that America underwent during the ‘60s. GET TICKETS

"Beehive" features such iconic songs as "The Name Game", "River Deep, Mountain High", "Natural Woman", "My Boyfriend's Back", "One Fine Day", "It's My Party", "To Sir With Love", "Proud Mary", "Where The Boys Are", "Make Your Own Kind of Music" and more.

From the '60's, we take a leap forward into the '70's when "Saturday Night Fever: The Musical" brings disco fever to Media's stage April 17 to June 9.

A Broadway, West End and US/UK tour favorite, this energetic musical is based on 1977's hit blockbuster film, featuring music by The Bee Gees.

The musical adaptation of "Saturday Night Fever" is the story of Tony Manero, a talented, streetwise kid from Brooklyn who attempts to escape a dead-end life through dancing. His weekends are spent at the local discotheque, where he enjoys the admiration of the crowd and a growing relationship with a young woman.

The script has been adapted to be more 'family friendly', with several of the movie's sub-plots such as racial conflict and drug use having been eliminated. GET TICKETS 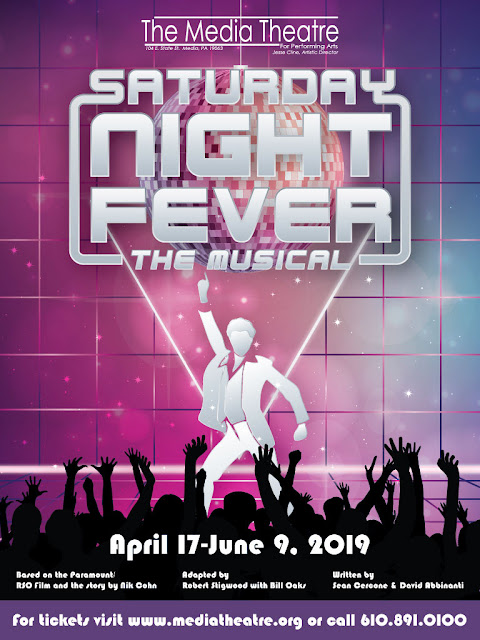 With the new focus of "Saturday Night Fever" on just Tony Manero and the energized disco hits, a few songs have been added such as The Bee Gee's iconic "Tragedy". Other songs in the musical are "Stayin' Alive", "Boogie Shoes", "Disco Inferno", "Night Fever", "Jive Talkin'", "Nights On Broadway", "More Than A Woman", "You Should Be Dancing", "If I Can't Have You" and more. Exciting choreography adds to the '70's atmosphere.

Jesse Cline directs "Saturday Night Fever: The Musical" at The Media Theatre, with Christian Ryan as choreographer and Ben Kapilow as music director.

The "Saturday Night Fever" cast at The Media Theatre is: