DOWNINGTOWN'S JOHN VIGGIANO WINS 'THE VOCALIST 2018' AT THE MEDIA THEATRE

18 year old John Viggiano, of Downingtown, took the honor as being the best of the best at “The Vocalist” 2018 Contest. The annual competition, produced at The Media Theatre, was held for three weeks on Wednesday nights in July. It has been sponsored by Iron Workers Bank for the past decade.

Viggiano wowed the judges and the crowd during the finals, after making it to the Top Five, with his rendition of “Words Fail” from the Tony Award winning musical Dear Evan Hanson. The young singer performed songs from various musicals throughout the competition and will be attending Ryder University in the Fall, studying Theater.
He walked away with the top prize of $750 in cash, plus a $250 gift certificate to The Media Theatre.

Second place, and a cash prize of $250, went to Swarthmore’s 17 year old Ben Mergott, who performed a mix of classic pop tunes and musical theatre pieces during the three week event.

The winners were chosen from a pool of judges who ranked them on a scale of 1 to 10 each week in the categories of Vocals, Stage Presence, and Song Choice. The Media Theatre’s Artistic Director Jesse Cline was the one constant judge who had an extra category for Individualism. Cline is on stage throughout the contest, as he chats with the contestants each week following their performances.

Assisting in the tabulations was the Online & Public Voting, during which the general public and “Vocalist” audiences were able to place votes for their favorite contestants either online or at the theatre.

The judges’ scores account for the highest percentage of the final outcome. Additional points are added to those who receive the highest Online & Public Voting amounts. The scores were accumulated throughout the three week contest, with no judges’ scores or votes eliminated.

"We created this contest eleven years ago," Cline said. "It furthers our mission of music theatre education, allowing young people an opportunity each week to actually perform songs they love in front of a live audience. They are all winners, as they are finding ways to express themselves doing what it is they love to do. Audiences enjoy it, and we thank Iron Workers Bank for continuing to support this important program each summer."

Cline continued, "As a professional music theatre company that produces a five show Broadway Series season every year from September through June, it's very important that we include educational opportunities for young people. We have had nationally recognized names on our stage, and they set a great example for these young performers to follow."

"We have "Sweeney Todd" coming up in the fall," Cline said. "The cast is made up of professional actors from auditions we held in New York and here in Media for the Philadelphia region. Our 2018-19 Broadway Series is exceptional, so go online and visit our web page for dates and times."

"The Vocalist 2018" was emceed each week by Kelly Briggs, who appeared on Broadway in "Cats" and several other musicals.  The contestants were accompanied by the theatre's Resident Music Director Ben Kapilow.

For more information regarding acting classes, voice lessons, dance class, or The New School at The Media Theatre, call 610-891-0100 or visit mediatheatre.org. Subscriptions are available for the entire Broadway Series season which includes "Sweeney Todd", “The Wizard of OZ”, "Julius Caesar", "Beehive” , and “Saturday Night Fever”.

"Sweeney Todd: The Demon Barber of Fleet Street" is the show's actual title, and its quite fitting for a musical that has become a thrilling theatrical treat around the world. GET TICKETS

The winner of eight Tony Awards, including Best Musical, the show opened on Broadway in 1979. With music and lyrics by Stephen Sondheim and a book by Hugh Wheeler, it is based on a 1973 play by Christopher Bond. 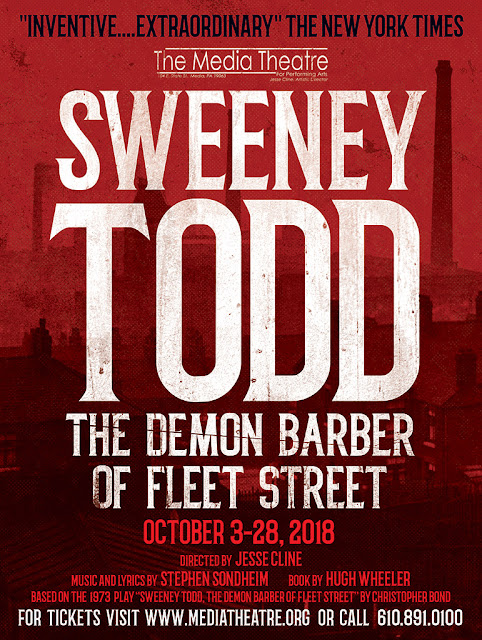 "Sweeney Todd" is an unjustly exiled barber, who returns to nineteenth century London to seek revenge upon the judge who had him framed. He meets Mrs. Lovett, the proprietress of a failing pie shop and opens new barber shop above her establishment. Her pies suddenly begin to sell after she begins working with Todd to add an interesting ingredient into her meat pies. The New York Times calls the show "Extraordinary".

The show includes the songs "Not While I'm Around", "Johanna", and "Pretty Women". It was adapted into a major motion picture in 2007 starring Johnny Depp.

The Media Theatre's production features Douglas Ladnier as Sweeney Todd. Ladnier appeared on Broadway in "Jekyll and Hyde: The Musical", and was in the National Tours of "Into The Woods" and "A Christmas Carol". He has performed at The Lyric Theatre of Oklahoma, Music Theatre of Wichita, The Geffen Playhouse, and Merry-Go-Round Playhouse. He has been in productions of "Sweeney Todd", "Gigi", "Dracula", "Phantom", "Chess", "The Sound of Music", and "The Desert Song" as well as other well known titles. He had a recurring role in "All My Children" on ABC.

Mrs. Lovett will be played by Jenny Lee Stern. She recently appeared at The Media Theatre as Patsy Cline in "Always, Patsy Cline". Her Broadway credits include the original cast of "Rocky: The Musical" and "A Christmas Story". She played the role of Mary Delgado in the National Tour of "Jersey Boys". Off-Broadway she appeared in "Forbidden Broadway: Alive & Kicking" garnering critical acclaim for her portrayals of Judy Garland, Patti Lupone, Bernadette Peters, and Sutton Foster. She frequently cameos as Guest Diva in Forbidden Broadway's latest installment "Spamilton". She has been seen at The Walnut Street Theatre and The Montgomery Theatre.

For tickets to the production, or subscriptions to the entire season, call 610-891-0100 or visit mediatheatre.org

The entire "Sweeney Todd" cast at The Media Theatre October 3 through October 28 is: