The Media Theatre’s children’s show for the holiday season is coming up soon. “Jack Frost Saves Christmas” is on Saturdays at 11am and Sundays at Noon November 26 through December 31.

This one hour upbeat and heartfelt show for youth of all ages is all about the boy who can't seem to do anything right because everything he touches turns to ice! Soon, however, friendship and the art of giving get everyone in on the act for a wonderful holiday. 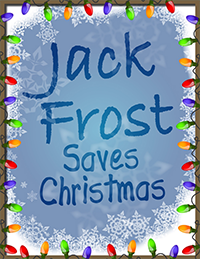 "Jack Frost Saves Christmas" was written by Matt and Tina Jo Wallace with music by Scott Bradley, a previous resident music director for The Media Theatre. Songs include "Countdown to Christmas", "Frost", and "Gifts Are For Giving". The show begins at The North Pole where Jack Frost is in the company of four humorous animals who make jokes and sing before he disappears and mistakenly enters a small town's holiday musical.

The production features a cast of the theatre's professionally trained acting, dance, and New School students along with three special guest adult actors.

Austy Hicks, recently seen at The Media Theatre as Jesus in “Godspell” and as Enoch Snow Jr. in the Broadway Series production of “Carousel”, plays the lead role of Jack Frost. He was also seen as Jack (a different one!) in “Into The Woods” and was a brother in “Joseph and The Amazing Technicolor Dreamcoat”. He’s also been in The Limelight Theatre of West Chester’s “The Wizard of Oz”.

This is the third time The Media Theatre brings “Jack Frost Saves Christmas” to its historic stage. It is the only theatre in the Philadelphia region where audiences of all ages are able to enjoy the one hour musical comedy.

Music Direction is by Justin Adams. The colorful costumes are by Carol Sorensen. The show includes audience participation and an opportunity for children to be on stage during the "Rompin' Reindeer" dance.

The show plays Saturdays at 11am and Sundays at November 26 through December 31. To purchase tickets call 610-891-0100 or visit mediatheatre.org. It's just $12 for children and $15 for adults to enjoy this special holiday themed treat.

The complete cast for “Jack Frost Saves Christmas” is: