Exelon Generation is pleased to announce its support of community theatrical arts by sponsoring the first-time ever collaboration between The Media Theatre and Chester Boys and Girls Club.

“Choices,” is a provocative and introspective work that highlights the challenges and difficulties often faced by at-risk youth growing up in the city of Chester, PA. This original work was written and is being performed by six youth who recount their experiences and some of the choices they have made growing up in a historically underprivileged community. 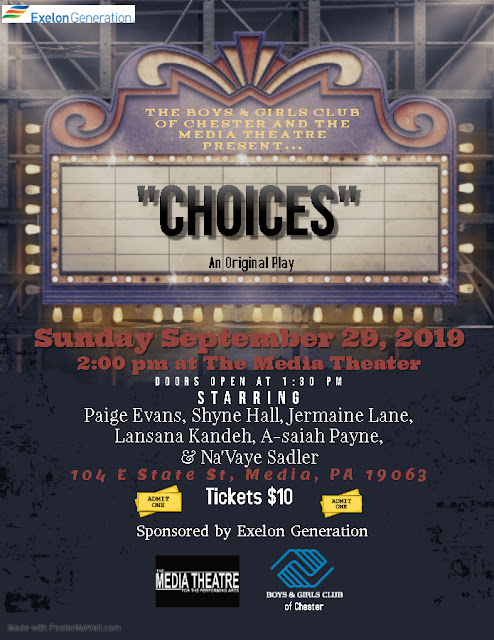 “This is a performance about art, voice, crisis, diversity, triumph, humanism, and friendship," said The Media Theatre's Artistic Director Jesse Cline. "We are incredibly proud of the boys and girls who have dedicated their time and energy for the last several months to rehearse. We are also very appreciative of Exelon Generation for their generous support of this program.”

“Through sponsorships and support of community-based programs, we help people of all ages and backgrounds enjoy and experience the arts throughout our region,” said John Barnes, president, Exelon Power. “The arts unify our communities regardless of age, race
and ethnicity and help us express our values, and build bridges between cultures – we are extremely proud to sponsor this important collaboration and the performance of “Choices.”

“Choices” is a one-time only performance scheduled for Sunday, September 29 at 2:00pm at the Media Theatre.
Call 610-891-0100 or visit mediatheatre.org for info.

MEDIA THEATRE HAS ROGER RICKER 'WE ARE FAMILY' CONCERT SEPT. 14

Roger Ricker has spent just about half of his lifetime at The Media Theatre. "Started in 1994, when I was 30 years old," he reminisced.

"Being involved in almost every aspect of the company has kept me  feeling young," he said. "There is no monotony here. Each day is a new chapter. And, sometimes, it's a new show."

The show on Saturday night, September 14 at 7pm, will be the annual Roger Ricker & Friends fundraiser for The Media Theatre. "I like to refer to them as fun-raisers, because we just have a party," Ricker explained. "We have lots of surprises and special guests, The State Street Miracles, and very talented youth performers to round out the show."
This year's theme is "We Are Family" and, somewhat fittingly, will be the first performance on The Media Theatre's brand new stage. "It won't be complete yet," he said. "But the foundation will be there. Should be a very exciting night!"

The annual Volunteer of The Year Award will be presented to Havertown's Carol Sorensen. She donates her talent up to four times per season as The Media Theatre's Children's Series Costume Designer. "Carol is a treasure," Ricker stated. "Her costume design work is impeccable. She adds such dimension to our Children's Series. Tellingly, she does it out of the kindness of her heart because she loves the theatre and the children. That's definitely worth an Award!"

Special guests this year include Delaware County icon Susan Wefel, who will make her first appearance in the two-time Broadway World Award-winning Ricker concerts. She has a connection to The Media Theatre, due to emceeing the annual summer singing contest "The Vocalist", and by having appeared in several musicals directed by the theatre's Artistic Director Jesse Cline.

Philadelphia's Tamara Anderson will also join the party by singing two duets with Ricker and performing one of her favorites. She was recently seen in "Saturday Night Fever" at Media and will be in the upcoming "Matilda: The Musical" as Miss Phelps.

One of Media's most popular performers, Broadway and Cabaret entertainer Kelly Briggs, will once again join Ricker on stage. He will be seen in two of Media's upcoming productions, "Matilda" and "Elf".

Both of the young actresses sharing the role of "Matilda" (Sydney Amos and Zoe Nesbitt) will perform a song from that show--together, for the first time.

The Youth Ensemble will join professional performers in several numbers, and The State Street Miracles will once again prove they are 'adults with abilities' as the intellectually challenged group will sing some of their trademark numbers.

"I'll be doing upbeat pop songs for the most part," Ricker said. "Probably some songs the new generation doesn't even know, but hey--let's introduce them to a few oldies, right? It's all for the future of The Media Theatre."

For tickets, at $25 each, visit mediatheatre.org or call 610-891-0100. Sponsorship packages are also available for the September 14 fundraiser. The accompanist for the evening is Resident Music Director Ben Kapilow.
Laura Thomas Dutton choreographs.

The theme, "We Are Family", speaks to a dedicated group of professionals, volunteers, families, and students who have a shared goal which is to strengthen The Media Theatre's mission of professional music theatre as it moves into the future. 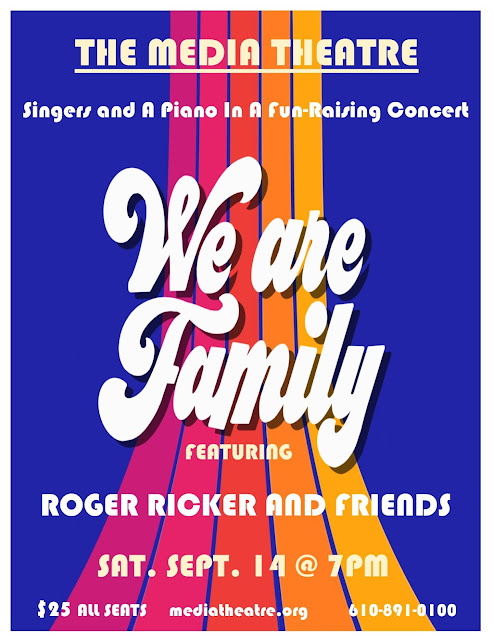