THE WIZARD OF OZ is the beloved tale, in which a Kansas farm girl travels over the rainbow to discover the magical power of home, that has been entertaining audiences for generations. The motion picture, released in 1939 and an annual treat for families every year on the small screen, comes to life in this stage musical version adapted from the MGM film. An all-star Philly cast brings the show to life at The Media Theatre Nov. 14 through Jan. 13.
This two-act Broadway musical includes the songs "Over The Rainbow," "Munchkinland (Ding Dong! The Witch Is Dead)," "If I Only Had A Brain/A Heart/The Nerve," "We're Off To See The Wizard (Follow The Yellow Brick Road)," "The Jitterbug," and "The Merry Old Land of Oz" and "If I Were King Of The Forest."
The live orchestra which accompanies the cast will be conducted by The Media Theatre's Resident Music Director Ben Kapilow. Audiences will be able to see the musicians as well as hear them, as for this production the orchestra will be on a raised platform on stage throughout the show. 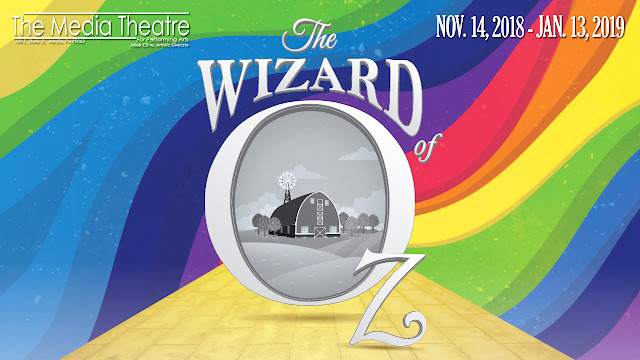 A cast of professional actors will bring OZ to life, including several of Philadelphia's award winning stars such as Jennie Eisenhower (Wicked Witch), Elisa Matthews (Glinda), Kelly Briggs (Cowardly Lion), Bob Stineman (Tin Man), and Carl Smith (Scarecrow). JP Dunphy is Uncle Henry and the Gatekeeper, and Media's own Roger Ricker is Professor Marvel and The Wizard.
Philadelphia's Anna Rosenthal portrays Dorothy. She was seen on The Media Theatre stage in "Billy Elliot" and "Bridges of Madison County". Other professional productions include "Meet Me In St. Louis", "Ragtime", "Mary Poppins", and the off-Broadway show "Timmy The Great".

"The Wizard of OZ" is currently celebrating the 80th anniversary release of the 1939 film, which the stage musical is based on.

Below, in her first blog entry on Media Theatre News, 8 year old Lily Jo Shelkin who is in the show talks about her experiences.

"Hello.  My name is Lily Jo and I am 8 years old.  I have been doing theater classes with Roger Ricker since I was 4 years old.  He taught me this quote that you should always remember on stage --- “Acting is living as truthfully as one can under an imaginary circumstance”.   He also taught me upstage and downstage and other important things to know on stage.

Then, I noticed some of my friends were doing plays, and I wanted to do them too.  My first play at Media Theater was Madagascar Jr. and it was so much fun I wanted to do more.  In my picture you can see me and my friends doing our first performance of The Five Little Pumpkins.  I am Petunia, the first pumpkin on the gate.  I sing a song about umbrellas and keeping the neighborhood kids dry.  If you come to the show and don’t see me, it is because my part is double cast with Sydney Amos who is a great actress and my friend.  It is an awesome show by Ben Kapilow and Roger Ricker.  Come see it on Sundays at noon!

Also, this year I started New School at Media Theater.  We have class one day a week for 2 hours.  My teachers are Jesse Cline and Ben Kapilow.  Jesse is very helpful and kind.  Ben knows every piano song you ask him to play.  We have been practicing monologues and songs.

I also spend my summer at camp Media Theater and it is super exciting.  My favorite song we performed at camp was “Stick It To The Man” from School of Rock.

But, my favorite thing about the theater is making new friends and having the most fun I could ever have on stage!"
at October 22, 2018 7 comments:

Below, in her first blog entry on Media Theatre News, 8 year old Zoe Nesbitt who is in the show talks about her experiences.

"Hi!  My name is Zoë and I’m 8 years old and in 3rd grade.  I started taking theatre and music lessons when I was 5.  I love to sing, act, and dance.  What I want to do after school every day is run to Media Theatre.  Sadly, I can’t do that every day, but when I can, I hop in the car and go!  It’s amazing!

I love my New School class and working with Jesse Cline and Ben Kapilow- it’s what I want to do all the time.  I love doing rehearsals and plays and I LOVE being with my friends.

Right now you can see me playing the role of Peppy Pumpkin in the Five Little Pumpkins.  It’s an amazing show and it’s the first time it’s ever been performed- you can’t find this play anywhere!  I don’t want to give you too many spoilers, but in this play, I like to run and run and RUN!  When I don’t play Peppy Pumpkin, you can watch my friend Kiki play Peppy and find me in the ensemble.

The show is playing every Sunday in October at noon and Saturday, October 27th at 11 AM.  I hope to see you there!  Don’t forget to wear a costume and look out for the running Pumpkin!  Ruuuuuunnnnnn!"
at October 11, 2018 6 comments:

"Sweeney Todd" is an unjustly exiled barber, who returns to nineteenth century London to seek revenge upon the judge who had him framed. He meets Mrs. Lovett, the proprietress of a failing pie shop and opens new barber shop above her establishment. Her pies suddenly begin to sell after she begins working with Todd to add an interesting ingredient into her meat pies. The New York Times calls the show "Extraordinary".
The show includes the songs "Not While I'm Around", "Johanna", and "Pretty Women". It was adapted into a major motion picture in 2007 starring Johnny Depp.

Here are First Look Photos from the production. Photos by Maura McConnell.
For tickets: mediatheatre.org/ 610-891-0100

Jason Switzer plays the role of Judge Turpin in "Sweeney Todd" at The Media Theatre, on stage now through October 28. (Tickets available at 610-891-0100/ mediatheatre.org) 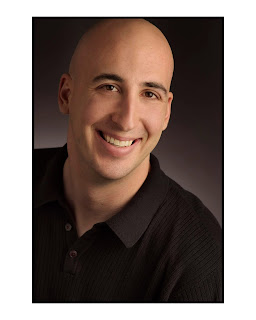 Here, he explains why he is happy to be in the production:

"Throughout my career, I have had the fortune to work in many of the greatest, most beautiful cities in the world.  It is, undoubtedly, one of the great perks of being a performing artist.  However, all the travel and living out of suitcases is not all it's cracked up to be.  Here are the sorts of things that have happened:

Very long travel days, like the time I took a red-eye flight, then another red eye, then an hour shuttle, then a 4-hour train, then a 2-hour train, then a 45-minute ferry, and finally was picked up by somebody in a car, driven straight to rehearsal.  I did not sing very well that day.

There was the time I finished a job in Bremen, Germany and was flying home from Hanover.  I didn't receive my wakeup call.  So instead of a nice relaxing train, I got in a taxi that drove me over 100 mph for 53 minutes where I barely made my flight.  I mention the 53 minutes because that's exactly how long the taxi driver said it would take to pull up to the gate.  It was thrilling.  The Autobahn is the best!!!

How about the time my luggage was lost in London, but I was going from city to city in Scotland and the airline was desperately trying to catch my luggage up to me, finally getting it to me when I returned back to London.  I will tell you that Scotland is very cold when you don't have your full slate of clothes with you.

Here's one of my favorites.  I had a flight canceled, so my hastily rescheduled connection had the city name right, but had me going to a different state.  Who knew there were so many Bloomingtons in this country?

Or how about the time I was in a very nice hotel when the fire alarm went off at 4 a.m. sending everybody out of the hotel.  And it was raining.  Why did it happen?  Somebody was smoking in their room and they had very sensitive smoke detectors in the hotel.

Which leads me to say how grateful I am that I am able to work so close to home, because life at home with two young girls isn't nearly as chaotic as being on the road in this crazy life."
Jason Switzer
(Judge Turpin)
at October 05, 2018 5 comments: