Remember how that movie "Elf" starring Will Ferrell made you laugh? And how heartwarming it was? Well, "Elf" is also a Broadway musical, and it's coming to The Media Theatre this holiday season (November 13-January 12). Christian Ryan directs and choreographs. Ben Kapilow is Resident Music Director. 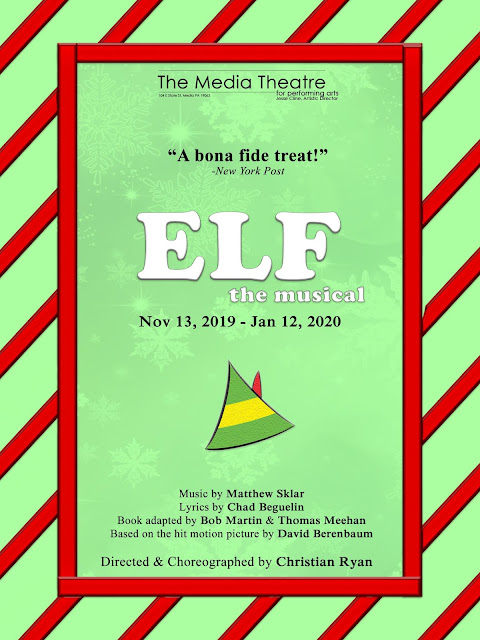 Buddy, a young orphan, mistakenly crawls into Santa’s bag of gifts and is transported to the North Pole. The would-be elf is raised, unaware that he is actually a human until his enormous size and poor toy-making abilities cause him to face the truth.
With Santa’s permission, Buddy embarks on a journey to New York City to find his birth father and discover his true identity. Faced with the harsh realities that his father is on the naughty list and his half-brother doesn’t even believe in Santa, Buddy is determined to win over his new family and help New York remember the true meaning of Christmas.
This modern-day holiday classic is sure to make everyone embrace their inner elf. After all, the best way to spread Christmas Cheer is singing loud for all to hear.
At The Media Theatre, the role of Buddy The Elf will be played by Chicago's Josh Houghton. He resides in Chicago, but enjoys performing all over the States. This will be his Media debut.
One of Philadelphia's brightest stars, Krissy Fraelich, returns to Media's stage as Emily Hobbs. Another well known Philadelphia actor, Bob Stineman, plays her husband Walter. Media Theatre student Aidan Crane will share the role of their son Michael with Alex Hamel.
Kelly Briggs takes on the dual role of Santa and Mr. Greenway.
For show information, dates and times, etc., please visit mediatheatre.org. ELF is on November 13, 2019 to January 12, 2020.
GET TICKETS
The complete cast is:
Buddy- Josh Houghton*
Jovie- Megan McDevitt
Walter Hobbs - Bob Stineman*
Emily Hobbs - Krissy Fraelich*
Michael Hobbs - Aidan Crane/ Alex Hamel
Santa/ Greenway - Kelly Briggs*
Deb - Emily Derrick*
Store Manager - Ryane Nicole Studivant*
Fake Santa/ Ensemble - Roger Ricker*
The Ensemble, playing everything from Elves to Townspeople to Fake Santas, also consists of Alyssa Arcangeli, Dante Brattelli, Gabrielle Impriano, Hannah Mehl, Jacob Schrimpf, Angel Sigala, Andy Spinosi, and Grace Szczepkowski.
*Member of Actors Equity Association