It's time to sing "Happy Birthday" to The Media Theatre's Roger Ricker at a special concert on stage Sunday afternoon June 5 at 3pm.

Ricker's birthday is actually June 7, when he will be a young 52 years old, but weekend parties are always the best so he has decided to put together a special fundraiser for the professional music theatre company.
The Roger Ricker & Friends "Happy Birthday" concert will feature the veteran performer singing a few of his favorite pop classics including "Karma Chameleon" and "Man In The Mirror". Ricker will be joined by a youth ensemble for "Purple Rain" as the late legendary Prince was also born on June 7.

In lieu of anyone giving him birthday surprises, Ricker requests that all gifts go toward Media Music Theatre Company which is the professional music theatre company housed at The Media Theatre.

"This concert is a fun way for me to celebrate getting younger," he said. "But it's really about supporting Delaware County's only professional music theatre. I ask that everyone who attends support the theatre with a donation in celebration of my 52nd birthday. That is the finest gift you could give."

Ricker has had quite a year of performance, having been featured in last summer's "The Who's Tommy" and "Disney's Aladdin Jr." as well as this season's mainstage productions of "Gypsy" and "1776" plus the Children's Series shows "Tale of Beauty and the Beast", "Peter Pan and Wendy", and the current "Sleeping Beauty". He's been with The Media Theatre since it opened its doors in 1995 and assisted with its transition to a not-for-profit in 2000. All told, he's been in just about 100 shows at the historic venue.

"This is a nice way to cap the last twelve months," he explained. "After this, I'll take a break from the stage for a while so be sure to come see the concert June 5!"

The State Street Miracles, the theatre's performance troupe of adults with developmental disabilities, will also perform during the special event as well as a few surprise special guests including Prospect Park Policemen Henry O' Neill, who will make his concert debut. O' Neill was The Media Theatre's Volunteer of The Year honoree in 2015. 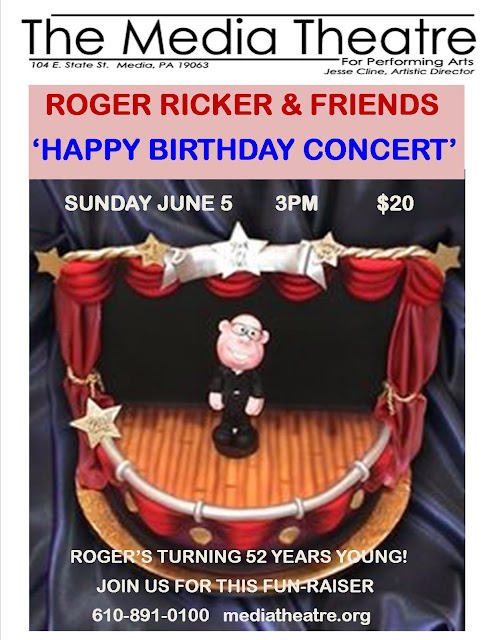 The classic Tony winning musical "1776" is on stage at The Media Theatre now through May 22. Don't miss this humorous, lively, and meaningful production all about our founding fathers who created the Declaration of Independence.

Tony winning composer and lyricist Jason Robert Brown has rescheduled his concert appearance at The Media Theatre for Wednesday evening May 18 at 7pm. All tickets for his previously scheduled April 9 show will be honored.

Seats are still available for the May 18 cabaret style performance during which he will also chat with the audience. There is also a Meet & Greet with Jason after the show during a private reception available with premium ticket. The concert is $45. There is an extra $10 fee to attend the Meet & Greet following the performance.
The Media Theatre is the first professional regional theatre in the Philadelphia/ Wilmington region that will be producing his Tony winning musical “The Bridges of Madison County” this coming fall. Based on the novel which was turned into a hit film starring Meryl Streep and Clint Eastwood, the show won Jason Robert Brown the Tony awards for Best Score and Best Orchestrations in 2014. Media will also be producing his teen smash “13” in July.

Jason Robert Brown is the ultimate multi-hyphenate – an equally skilled composer, lyricist, conductor, arranger, orchestrator, director and performer – best known for his dazzling scores to several of the most renowned musicals of his generation, including the recently revived “The Last Five Years”, his debut song cycle “Songs for a New World”, and the seminal “Parade”, winner of the 1999 Best Score Tony. The New York Times refers to Jason as “a leading member of a new generation of composers who embody high hopes for the American musical.”

His latest Broadway musical “Honeymoon In Vegas,” starring Tony Danza and based on Andrew Bergman’s film, followed a triumphant production at Paper Mill Playhouse.  A film version of Jason's epochal Off-Broadway musical “The Last Five Years” was released in 2015, starring Anna Kendrick and Jeremy Jordan and directed by Richard LaGravenese, and a film of Jason’s musical “13” is currently in development.
Jason studied composition at the Eastman School of Music in Rochester, N.Y., with Samuel Adler, Christopher Rouse, and Joseph Schwantner.  He lives with his wife, composer Georgia Stitt, and their daughters in New York City.  Jason is a proud member of the Dramatists Guild and the American Federation of Musicians Local 802 & 47.  Visit him on the web at www.jasonrobertbrown.com.

Two Media Theatre students, Lexi Gwynn and Anna Rosenthal, will appear with Jason Robert Brown on stage performing his songs as he accompanies.