The classic play by William Gibson which focuses on the stormy relationship between Helen Keller and her governess Annie Sullivan is at The Media Theatre January 28-February 15. It's "The Miracle Worker", which follows Media's new tradition of placing a classic play within its annual Broadway Series schedule.

The tradition started last winter with the highly acclaimed "Diary of Anne Frank" and, again, Artistic Director Jesse Cline has chosen a play which has much educational and historic value. Cline will also direct "The Miracle Worker", another fact-based drama. 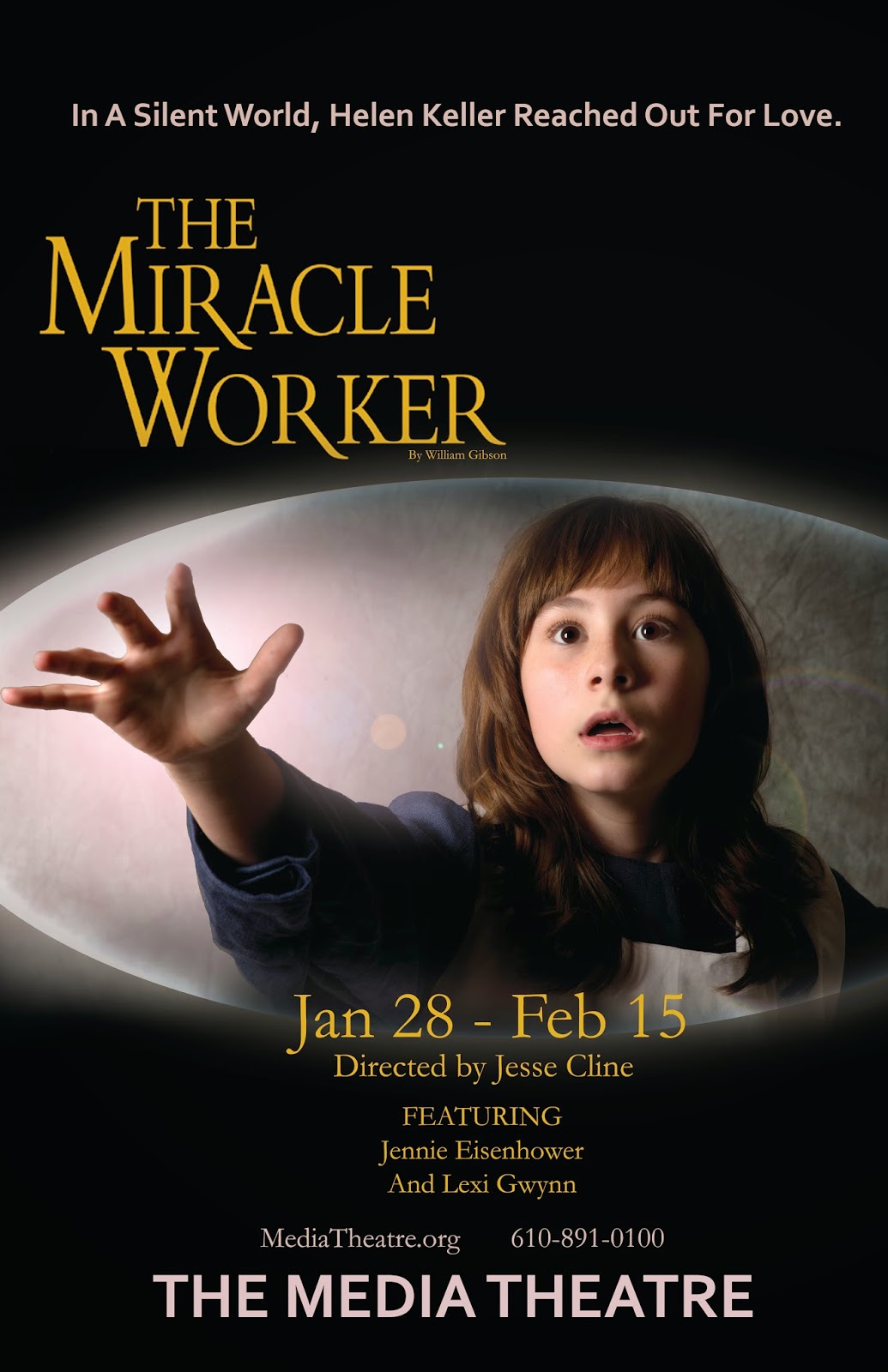 Helen Keller was rendered blind, deaf, and mute due to a childhood illness. William Gibson's play highlights the struggles of her family to control her wild behavior and their subsequent hiring of teacher Sullivan in an effort to assist their cause.The moving, triumphant show is a testament to the power of the human spirit as it highlights the struggle to be heard without speaking, to find one's way without sight, and to function without the ability to hear.

With several 10am performances scheduled on Wednesday and Thursday specifically for school students, The Media Theatre will highlight certain educational aspects of the production.

A professional cast of Actors Equity Association union members will bring the show to life, led by Lexi Gwynn as Helen Keller and Jennie Eisenhower as Annie Sullivan. Lexi Gwynn is a New School student at The Media Theatre who becomes a union member with this production. Eisenhower, well known to Media audiences and throughout the Philadelphia region, is a Barrymore Award winner.
Keller's parents will be played by Andrew Criss, making his Media Theatre debut, and Hillary Parker, seen previously in "Dr. Dolittle". Alex Kryger is James, Helen's teenage half-brother who holds resentment toward her.

Audience favorite Nicholas Saverine is Agnanos, the headmaster for the Perkins Institute of the Blind. Maria Wolf plays Aunt Eve, and Kelly Briggs portrays a Doctor.

Viney, a servant in the Keller household, is played by Tamara Woods with her young Kennedy Ndiaye and Nasir Turner as her children.

One of the most popular children's stories of all time is coming to The Media Theatre each weekend from January 24 to February 22. It's "Snow White", brought to life by a cast of young people who are studying at Delaware County's only professional music theatre. They are participants in The New School, which is the theatre's conservatory-style music theatre education program, or Acting Classes.

The entire cast for this unique production is made up of students who have a true passion for being on the stage, utilizing their talents to share this popular fairy tale with audiences. "Snow White" has a particular appeal to the very young, and having it represented by youth actors will only add to its message of goodness winning out over evil and jealousy.

In this version of "Snow White", a Wicked Queen hears from her mirrors of the beautiful young lady living in the forest with seven little people. The humorous clan do everything in their power to protect Snow White from the Wicked Queen. Along the way, there is a Fox, a Huntsman, and a Handsome Prince to delight audiences. The Wicked Queen also disguises herself as a younger version of herself and an old woman to trick Snow White.

The one hour show plays Saturday mornings at 11am and Sundays at Noon January 24 through February 22 and is perfect for ages 4 and up. For tickets or information call 610-891-0100 or visit mediatheatre.org

The "Snow White" actors are 'double cast', so that the young actors each have a chance to shine.

The "Snow White" cast is:

The Mirror is played by three actors at a time.
The Queen will be surrounded by Mirrors.
They’ll each state a section of each thing the Mirror says:
*MIRROR 1…JILLIAN DONOHUE/ LAUREN POLTROCK
*MIRROR 2... ANNA BOZZI/ SOPHIE LEONE
*MIRROR 3....CASSIDY ELSE/ SARAH SHOUMER

When not playing the role listed, all actors will be a part of the Ensemble.

THE MEDIA THEATRE HAS WINTER ACTING CLASSES STARTING IN JANUARY

It's a New Year soon, and time to register for the Winter Session of Acting Classes at The Media Theatre. They begin again the weekend of January 10 and are produced and supervised by Media Music Theatre Company, the professional music theatre organization which is housed at The Media Theatre. The classes offer a semester of professional training for those just beginning or wishing to further their education. A new class for parents of students will be instructed by Jesse Cline, Artistic Director, and Dance Classes will begin soon.
All acting classes are based on The Meisner Technique which follows the basic structure that ‘Acting is living as truthfully as one can under an imaginary circumstance.’ Within this curriculum there is no ‘character’ or pretense and actors are placed in an environment which allows them to be who they are, building self-awareness and self-esteem within their own unique personality. The idea of ‘copying’ someone else’s performance is pushed aside as actors create from within themselves to fulfill the required role they may be asked to portray.

The Media Theatre will continue to offer three levels of classes for children. The popular Children’s Class, for ages 6 and up, will meet on Saturday mornings at 9am beginning January 10 and continuing for ten weeks. This 10-week one-hour course is primarily for ages 6 to 9 who are just starting out or who have less stage experience than others in their age group. It features exercises for building basic speaking skills on stage (volume, diction), learning stage directions, and developing self-esteem. Fun improvisational style exercises are also utilized to build the concept that acting requires team work on occasion.

Level Two for Children will meet Tuesdays at 4:30 beginning January 13. This 10-week one-hour course is appropriate for children ages 8 to 11, or for those who have some onstage experience. The focus is primarily on student scene work to strengthen beginning acting skills. Theatre exercises are also implemented to enhance stage focus and discipline. Diction is a big part of this class, as well as following direction with one-on-one instruction within a group environment.

Younger children, aged 4, 5, and 6, can get into the act with the Introduction to Theatre Class on Tuesdays at 3:30. The one hour weekly course is specifically designed for the youngest age group that has an interest in performing. The young children will learn by ‘Acting Out’ by 'talking to' a stuffed animal in which the topic of real conversation is approached. They may also be asked to act as if they are ‘walking in the rain or snow’ or to ‘show us how you deal with a pet dog or cat’. The class will instill within the students that being who they are is important and following instructions will be a major focus. Imagination will be a large ingredient of the Introduction to Theatre Class. 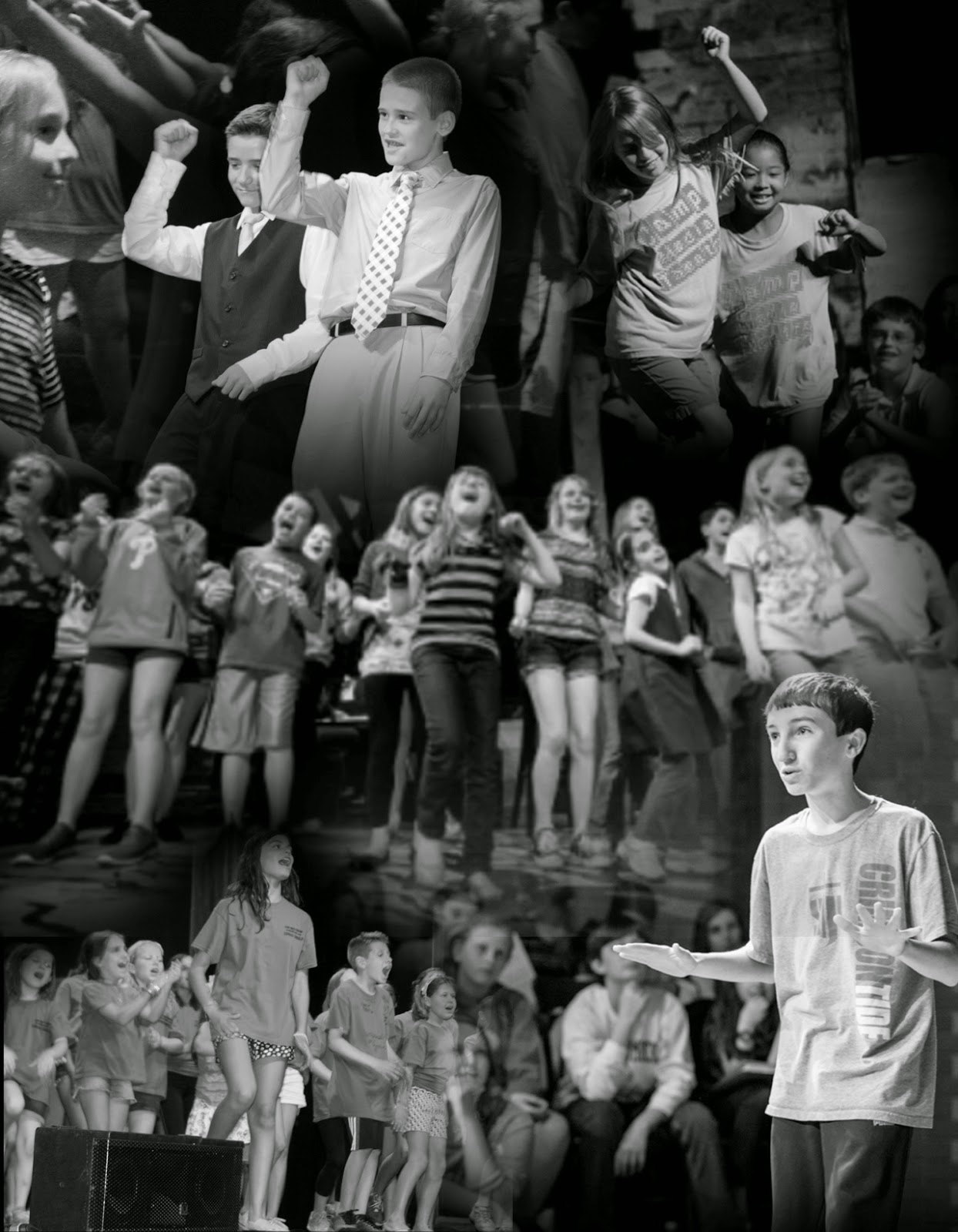 The Teen Acting Class will continue on Sundays at 6pm starting January 11. This eight-week 90-minute class is ideal for ages 12 and up. Each student is given one-on-one instruction within a group environment.  Focus is on stage skills, following direction,  scripted scene work with partners, and monologues. As the class progresses, the scene work or monologue is enhanced through continued study and performance. Improvisational Scene Work is also explored, and becomes a major part of the focus as the weeks progress, enhancing the ability to 'react quickly as you would without over-analyzing'.

The Adult Class will meet Sundays at 7:30. This eight-week 90-minute class is designed for the adult (18 and up) who wishes to explore acting for the first time or who wants to strengthen their stage skills. Scene study with partners and monologues are the focus.

Jesse Cline, the Artistic Director for the theatre company, will have a new class on Sundays at 6pm. The class is specifically designed for parents who currently have students enrolled at the theatre and is entitled "The Truth Is Everything". Cline will instruct the parents in the Meisner Technique so that they will be able to have a larger understanding of what their child or teen is experiencing in other classes. Cline will also continue to instruct and oversee the next semester of The New School, The Media Theatre's conservatory-style music theatre education program which focuses on acting, vocal music, and dance. There is availability for three students in the 2015 Winter New School. Call for interview or audition.

The other classes require no audition or interview. Roger Ricker, a stage veteran of over 85 productions and concerts at The Media Theatre, instructs the Children and Teen Classes. Tim Haney, who has been with the theatre since 1997, instructs the Adult Class.

The Media Theatre will begin offering Dance Classes in 2015. These classes, and all others, will take place at their new Education and Dance Center on State Street. Please call for information.

To register for the Acting Classes, please call 610-891-0100 or visit mediatheatre.org. Email rer764@gmail.com with specific questions or request information.
at December 10, 2014 1 comment:

The barricades are bringing them in!

The Media Theatre's production of "Les Miserables" is so popular and critically acclaimed its run is being extended by one week. The show will now play through January 18 rather than its original closing date of January 11.

The extra week will not have a Wednesday matinee, but will have 7pm evening performances on Wednesday, Thursday, Friday and Saturday night as well as afternoon matinees on Saturday and Sunday.
The cast has been widely acclaimed with rave reviews from the Philadelphia Inquirer, Broadway World, Delco News Network, Delaware County Daily Times, Theatre Sensation, and Ticket Magazine. The Inquirer said the show was "Spectacularly Sung" while Philadelphia's renowned theatre critic Neal Zoren called it a "Triumphant Production". Audiences have agreed, with consistent standing ovations and record ticket sales for The Media Theatre's holiday production.

Jesse Cline, who is also receiving acclaim, directed the show set during the backdrop of revolutionary France during which Jean Valjean is persistently pursued by inspector Javert. The men, who are eternally bonded by being adversaries, begin to question their very existence while deciphering what it is that defines them.

"Les Miserables" is the world's most popular musical, with more tickets sold around the globe than any other stage show. It's based on Victor Hugo's legendary novel. The iconic score includes songs such as "Do You Hear The People Sing?", "On My Own", and "I Dreamed A Dream".